On August 24th, Bay Area Microfluidics Network (BAM) successfully had its inaugural event at the Stanford University School of Medicine. Nearly a hundred participants attended the event, including graduate students and postdocs from Stanford University, UC Berkeley, and San Jose State University and many working professionals from local biotech companies and startups. 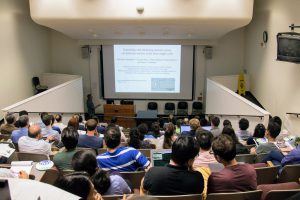 The inaugural event started with an introduction of BAM by the founding team, Yatian Qu and Thomas Carey. Founded in early 2017, BAM aims to bring together leaders in microfluidic technologies in the Bay Area to foster innovation and collaboration. 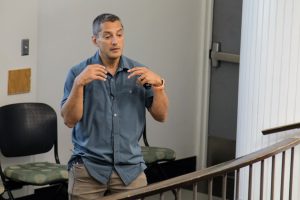 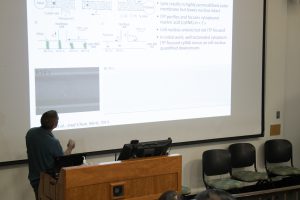 After a brief introduction, Prof. Juan Santiago (Mechanical Engineering, Stanford University) presented the latest research from his group on “Separating and analyzing nuclear versus cytoplasmic nucleic acids from single cells”. As the audience learned about promising applications of microfluidics, the Sr. Manager of Scientific Research at Illumina, Dr. Tarun Khurana, presented on “Microfluidics Technologies for DNA Sequencing Applications”. 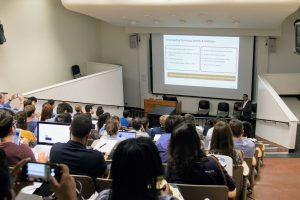 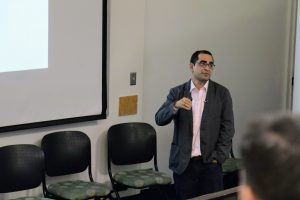 Inspired by talks by renowned experts in microfluidics, the audience participated in an interactive panel discussion on “Recent advances, applications and challenges in Microfluidics”. The discussion was moderated by Dr. Lewis Marshall, manager and lead engineer at Purigen Biosystems. During the discussion, Prof. Juan Santiago, Dr. Tarun Khurana, Ms. Lu Zhang (founder and managing partner of Fusion Fund) and Dr. Joshua Cardiel (Sr. Mechanical Engineer in Berkeley Lights) shared their perspectives on current challenges and opportunities, especially in technology development, commercialization and investment in the microfluidics space. 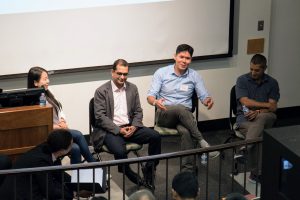 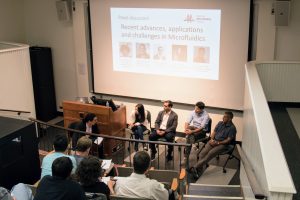 The inaugural event ended with a fruitful discussion between the audience and the speakers. Many participants mingled and stayed late after the event to share thoughts, opinions and ideas. Many attendees also expressed a high interest for BAM’s future events. 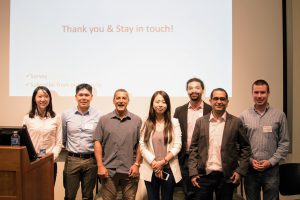 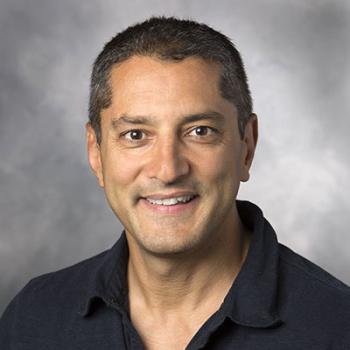 Juan Santiago received his MS and PhD in Mechanical Engineering from the University of Illinois at Urbana-Champaign in 1995. His research includes the development of microsystems for on-chip chemical and biochemical analysis, methods for sample preparation, miniature pumps, and electric-field based deionization methods. Applications of this work include genetic analysis, drug discovery, portable power generation, and the production of drinking water. Among other recognition, he was awarded a National Science Foundation Presidential Early Career Award for Scientists and Engineers (PECASE) (’04) and the Outstanding Achievement in Academia Award by the GEM Foundation (’06). He is a Fellow of the American Physical Society, a Fellow of the American Society of Mechanical Engineering, an Associate Editor of the journal Microfluidics and Nanofluidics, co-founder of several companies in the microfluidics area, co-inventor of micron-resolution particle image velocimetry (Micro-PIV), and director of the Stanford Microfluidics Laboratory. He has served as Associate Editor of the journal Lab on a Chip (’08-’13). Santiago has given 25 keynote and named lectures and more than 100 additional invited lectures. As one measure of impact, his work is cited about 1000 times per year (Scopus h index of 43, and Google Scholar h index of 52). He has graduated 24 PhD students and advised eight postdoctoral researchers. 16 of his former advisees are now professors at major universities. He has authored and co-authored over 150 archival publications and 200 conference papers, and holds 34 patents. 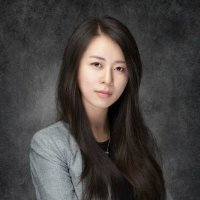 Lu Zhang is the Founding and Managing Partner of Fusion Fund (A.K.A. NewGen Capital). Prior to starting Fusion Fund, she was a Venture Partner at Fenox Venture Capital. She participated in over 20 investments and assist M&A of the portfolios. Lu was also the Founder and CEO of a start-up focused on non-invasive technology for the early diagnosis of Type II diabetes (acquired in 2012). Lu received her M.S. in Materials Science and Engineering from Stanford University and holds several patents. She is an advisor and mentor to several innovative programs and incubators in Silicon Valley. Lu has won numerous awards and is frequently invited to speak at events. She was awarded the Forbes US 30 under 30 & Featured as the Honoree of VC category. She was also awarded the Forbes Asia 30 under 30 of Finance category in the same year. She was recently awarded as the T&C 50 Modern Swans Influencer, representing top female entrepreneurs in US. 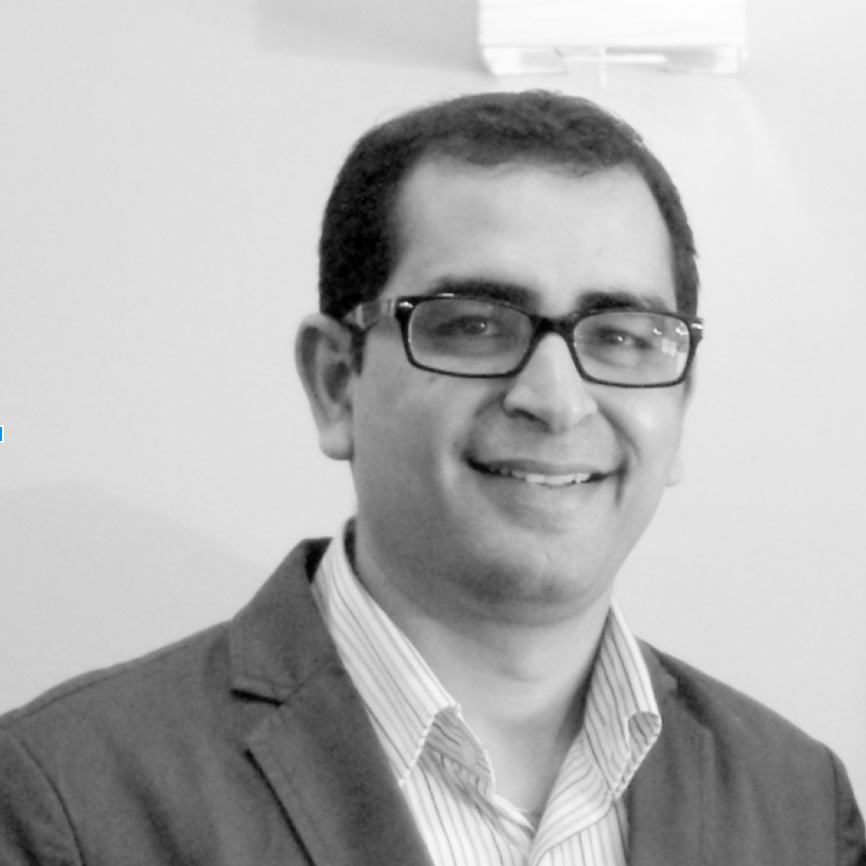 Dr. Tarun Khurana is a Senior Manager in the Scientific Research division at Illumina Inc where he leads the Advanced Fluidics Technologies group. His research focuses on application of advanced microfluidics technologies such as electrowetting-on-dielectric (EWOD) based droplet manipulation, two-phase droplet microfluidics and inertial microfluidics to develop novel tools for DNA extraction, library preparation and single-cell analysis via DNA sequencing applications. Prior to working for Illumina, Dr. Khurana worked for Avantome, a startup developing pyrosequencing based DNA sequencing platform. Dr. Khurana completed his PhD in Mechanical Engineering from Stanford University in 2008 with focus on microfluidic electrophoresis methods for high sensitivity analytical detection and has developed over 25 patented or patent-pending technologies. 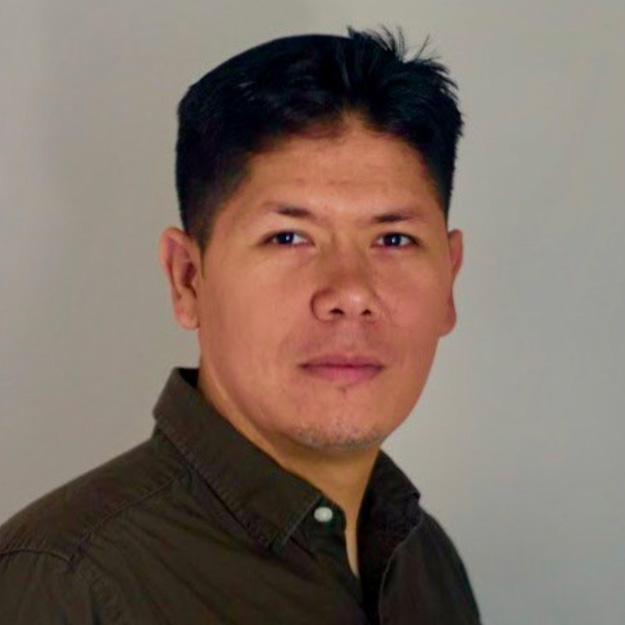 Joshua Cardiel is currently working as a Sr. Mechanical Design Engineer-Microfluidics in the R&D team at Berkeley Lights Inc. He received a Ph.D. in Mechanical Engineer and Nanotechnology from the University of Washington in Seattle. His doctoral research focused on experimental studies of microfluidic-based synthesis of nanostructures. He held postdoctoral positions at the National Institute of Standards and Technology (2016) and University of California in San Francisco (2015), where he studied droplet microfluidics to produce libraries of biopolymer nanostructures for biotechnology applications.

BAM would like to thank Dolomite Bio for their generous sponsorship of our inaugural event and volunteers that helped with event logistics.